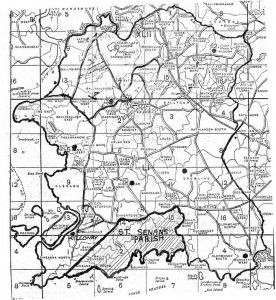 The area was, for over 200 years, in pre-Reformation times made up of seven parishes: Kilnasoolagh,Tuamfinlough, Bunratty, Drumline, Clonloghan, Kilconry, Kilmaleery. In the very confused times after 1688AD there were two priests in the area. One served Kilnasoolagh and Tuamfinlough; the other served the other five parishes. In 1776AD James O’Shaughnessy was appointed parish priest of Bunratty, Drumline, Clonloghan, Kilconry and Kilmaleery.

On the death of James O’Halloran in 1782, Kilnasoolagh and Fenloe were also given into his charge. The area remained as one parish until in December 1967 when the present parish of St Senan’s Shannon was set up. During the twentieth century there was profound social change. What was once an agricultural community is now a community depending not only on agriculture but on the service and manufacturing industries of Shannon Airport and the associated industrial estates. The present population is approaching 3,800 with over 1200 dwellings.

The word parish has a strange history coming from two Greek words “para” and “oikos”. A paroikos was a sojourner, one living apart in a foreign community. The early Christians saw themselves as strangers in this world waiting to enter God’s kingdom. The word paroecia came to refer to the district ruled by a bishop, modern diocese. By the fourth century its meaning had changed as local churches were being built and the priests resided near these churches rather than in the bishop’s household. The parish then became a defined geographical area with its own church and its own pastor, where God could be present among his people and they could come together to worship and adore him.

In early Christian Ireland the church was organised around monasteries rather than dioceses or parishes. The basis of the present diocesan structure was set up at Reathbreassil in 1111 AD. The arrival of the Normans in 1169 helped in the development of the parish structure. The first list of parishes for the diocese of Killaloe dates from 1303AD. The present parishes of Newmarket-on-Fergus and Shannon include seven of these pre-Reformation or Civil Parishes, each with its own church and priest.

This system broke down during the anti-Catholic laws of the seventeenth and eighteenth centuries. When the penal legislation was relaxed after 1782 parishes, because of the scarcity of priests, were amalgamated. Very quickly a new system of churches was built up. In Newmarket area three replaced the original seven. The new churches tended to be built five or six miles apart, to facilitate a walking congregation, when a site was made available by a well disposed landlord. At the same time newly established Maynooth was training more priests and parish priests were able to hire one or more assistants in time called curates.

People identify with their nearest church where they worship each week. The geographic area can have two or thee physical centres rather than the one parish church. If present trends continue the original idea of one priest to a parish will become the norm. All we can do is to strive as best we can to cope with the less than ideal circumstances in an ever changing world and realise that our parish is the place and structure designed to serve our spiritual needs. 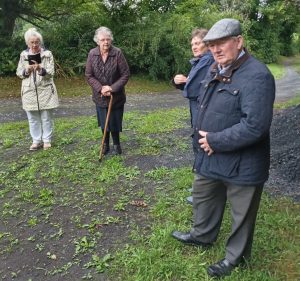